Newly planted R. ‘Cynthia’ on Ridge Road in the arboretum was blooming in July although its recorded blooming period is Midseason from approximately the first week to the second week in May.

The plant was purchased last fall from a nursery in Albany, Oregon and was over-wintered in the propagation greenhouse and planted in the arboretum in May. Fully budded at the time of planting, it seems to have adjusted well to the soil conditions of its new location.

One of the earliest rhododendron crossings made before 1870, the English nursery of Standish and Noble produced a hybrid which they introduced and named ‘Cynthia’ for the Greek goddess and sister of Apollo. The rhododendron made way to Boston, Cape Cod and Long Island estate gardens around 1910. 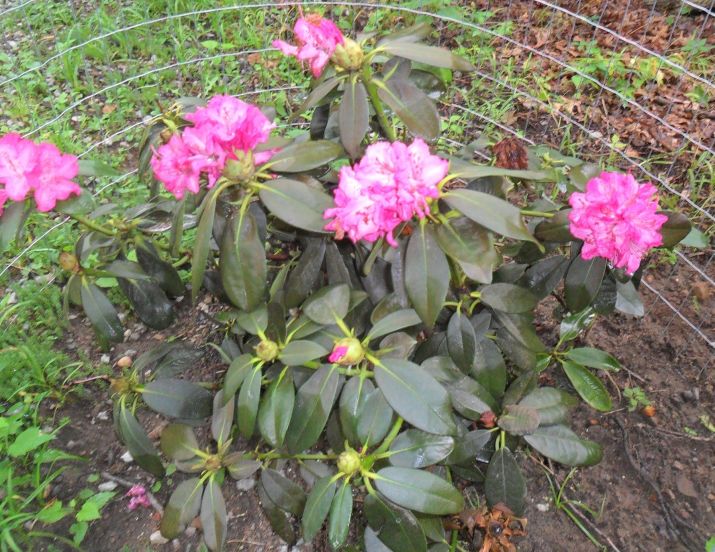 ‘R. Cynthia’ located on Ridge Road
A wire cage around the plant protects it from deer browsing.

‘Cynthia’ found its way to Laurelwood Gardens in the 1950’s. Dorothy Knippenberg commented on it during her slide program in February 1964. She noted that “a planting of ‘Cynthia’ bloomed in our woodland after minus 8 degrees of winter frost. It is a very old hybrid not expected to be hardy and blooms on the north side of a very large hemlock.”

According to Dorothy’s records, the original ‘Cynthia’ was located on Ridge Road overlooking the large boulder and view downhill to the second bridge. Our Rhododendron Study Team located a nursery in Oregon where ‘Cynthia’ was available for sale. The new ‘Cynthia’ has been planted in the approximate location of the former original rhododendron.

Donations to Friends of Laurelwood Arboretum help to support the garden’s maintenance, operations and public programs.

Dues and donations are deductible for income tax purposes to the extent allowed by law.
Friends of Laurelwood Arboretum is a 501(c)(3) non-profit organization.

Friends of Laurelwood Arboretum
is a 501(c)(3) organization

Laurelwood Arboretum grounds are open every day, 8 a.m. to dusk except in emergency conditions.